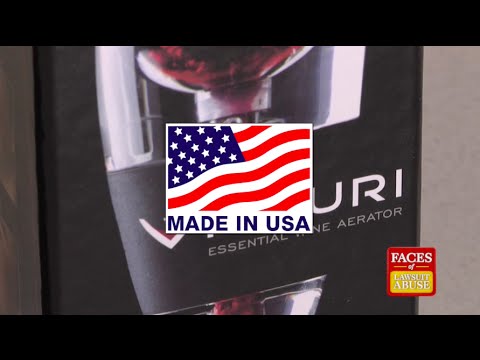 Wine Aerator Creator the Target of Costly, Abusive “Made in the USA” Lawsuit

Rio Sabadicci’s company is the creator of the Vinturi Aerator — a product that allows you to aerate your wine before sipping.

Unfortunately, his company was recently sued — not for the actual product, but because of its “Made in the USA” label.

“This whole product is made in the US,” said Michael Tannenbaum, Sabadicci’s lawyer. The only non-US-made part of the product, according to Tannenbaum, is the “decorative rubber band” on the aerator, which was made in China.

As such, an enterprising plaintiffs’ lawyer sued Sabadicci under California’s labeling law, where if so much as a screw of a product is made outside of the United States, the product cannot have the “Made in the USA” marking.

Fortunately, the judge dismissed the suit, ruling that the plaintiff brought the case with both subjective and objective bad faith.

Even though Sabadicci won the legal battle, he lost the war.

Sabadicci spent hundreds of thousands of dollars, hired three sets of lawyers and spent five years fighting in court. Frustrated with the whole process, he sold the company and is now working on other ventures.

“It was the all-American success story, and I got banged over the head for it,” said Sabadicci.

Watch the video above to learn more about this lawsuit and share this story with your friends.