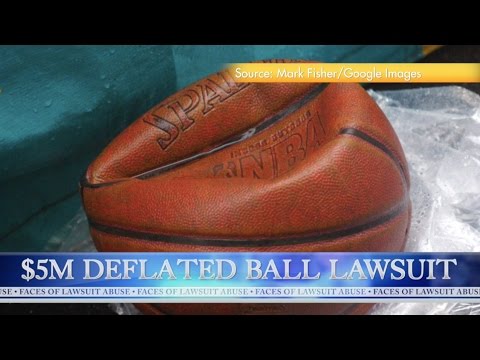 Most Ridiculous Lawsuits of 2016: Episode 3

$5 Million in Damages for a Partially Deflated Basketball?

The “Neverflat” basketballs from Spalding retail for about $29, and are guaranteed to “stay fully inflated for at least one year.”

But a New York man who claims to have watched his Neverflat basketball slowly lose air over 12 months’ time has filed a class action lawsuit — and it could mean as much as $5 million in damages for Spalding.

SoulCycle may be a trendy hit with celebrities and exercise fanatics across the country, but it’s safe to say that Carmen Farias isn’t a fan.

Farias is suing SoulCycle instructor Angela Davis for “gross negligence” that led to her injuring herself during her first spin class. She alleges that “the lack of instruction, design of the bike, volume of the music and darkness of the room” all combined to lead to an injury that continues to cause her physical and mental suffering to this date.

Lawsuit Turns $40 Printer Sale on Craigslist into $30,000 in Damages

If you’ve ever sold anything on Craigslist, you know that it’s typically a quick and easy way to part with stuff you don’t want anymore.

But for Doug Costello of Massachusetts it was anything but quick and easy. Selling a $40 printer turned into a six-year long legal nightmare that saw him facing a judgement for $30,000 in damages.